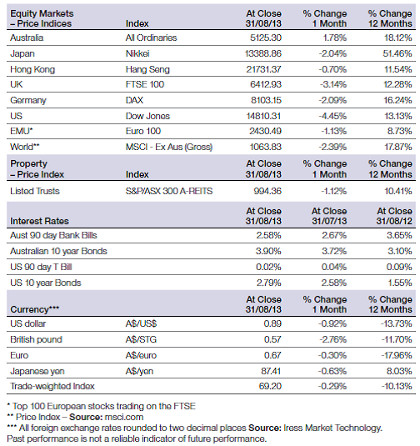 Global economic data and business surveys last month pointed to an upturn in growth in advanced economies. This is possibly heralding the start of the shift of global growth away from the emerging markets and toward advanced economies.

Over in the US, Gross Domestic Product (GDP) in the June quarter grew by 0.4%, for an annualised rate of 1.7%. While only a modest rate of growth, the result was above expectations and represents an acceleration of growth from the (downwardly revised) March quarter.

The June GDP result, combined with revisions to previous quarters, suggests an upward trend to GDP growth this year – although it has occurred off a lower base.

From a jobs perspective, the July employment report showed yet another solid month of growth and a further decline in the unemployment rate. While these are the two main labour market indicators, some other measures, such as the employment to population ratio, have been weaker.

While inflation was weaker in the June quarter and remains well below the Federal Reserve’s long-term objective, monthly growth in the Personal Consumption Expenditure price index strengthened in May and June.

In his post-meeting press conference in June, the Federal Reserve Chairman, Ben Bernanke, raised the prospect of QE tapering – a reduction in the size of Federal asset purchases in ‘measured steps’. Bernanke suggested this would start later this year in the context of continuing job gains, economic growth over the next few quarters and inflation moving back towards 2%.

Housing continued to be the stand-out sector in the June quarter, growing by 3.2%, to be almost 15% higher than a year ago. Notwithstanding the strong growth, it is still off a low base, and the level of activity still remains very low by historical standards.

Some of the economic indicators in the recession-hit Eurozone are looking less negative with the European Central Bank (ECB) seeing a stabilisation in economic activity at low levels.

The ECB has also suggested that it’s in no hurry to lift its low interest rates either. Over an extended period it envisages rates either staying the same or falling – as it expects inflationary pressures to stay modest into the medium-term.

Eurozone industrial production rose 0.7% in June, after contracting 0.2% in May. The figure was slightly below expectations but still provides support for a return to overall growth in the Eurozone. GDP rose 0.3% during the second quarter following three quarters of no growth.

The Chinese economy is showing signs of stabilising with trade data coming in somewhat above expectations, including much stronger import growth pointing to a pick up in domestic demand. These results were consistent with slight improvements in other indicators such as industrial production and business investment, although retail sales growth eased.

China’s leadership has confirmed a growth target of 7.5% this year, while implying a floor of 7% – the rate necessary to achieve prosperity goals by 2020 and maintain stable employment.

The Manufacturing Purchasing Managers Indexes were mixed during the month, with the official index showing improvement, rising to 50.3 from 50.1 the previous month. In contrast, the Markit index, representative of small and medium-sized firms, deteriorated further in the month to 47.7, from 48.2 in July.

Turning to consumption, nominal retail sales growth was somewhat disappointing in July, easing slightly to 13.2% – down from 13.3%. The result was below market expectations of 13.5% and the government’s target rate of 14.5% for 2013. The slowdown is relatively consistent with deterioration in consumer confidence.

Over in Japan, the combination of fiscal stimulus, central bank asset purchases and a lower Yen appears to have triggered an upturn in economic growth, with exports, consumer spending and business conditions all moving up. However, there have been a few recent setbacks with second quarter growth of 2.6% coming in below expectations (3.6%).

India has also slowed significantly with annual growth halving from around 10% in the first half of 2010 to around 5% in early 2013. The softening in growth is not surprising given the region is very open economically, highly trade dependant and has a business cycle that often mirrors that of the big advanced economies that have traditionally bought many of its exports. This time, the slowdown in Chinese growth has also impacted on all of East Asia by eroding its import demand.

In domestic news, the latest NAB survey showed that business conditions in July remained at a four-year low and confidence fell to the lowest level in eight months. Conditions were especially weak in manufacturing (despite the lower Australian dollar), construction, mining and retail.

On the jobs front, official Australian Bureau of Statistics data is beginning to paint a weaker picture of labour market conditions. In July, the number of people employed fell by 10,200, more than undoing the previous month’s rise. When combined with a fall in the participation rate, the unemployment rate was unchanged, and remained at a four year high of 5.7%.

Over to housing, and while there are signs of a resurgence in house price growth, the benefit of lower interest rates is likely to continue to struggle against a deteriorating labour market and worries about job security.

Inflationary data for the June quarter remained soft, and keeps the door open for further monetary policy easing in the coming months. Annual inflation was 2.4% in the June quarter – still well within the RBA’s 2-3% target range.

While the RBA lowered the cash rate by 25 basis points to 2.50% at its August meeting, the reduction only confirms RBA Governor Glenn Stevens’ sober outlook for the Australian economy.

While the lower Australian dollar and accommodative monetary policy settings should provide some relief for trade-exposed sectors, and assist a rebalancing of growth towards greater sustainability over time, the exchange rate is still historically high.

The Australian market continued to trend higher in August, with the S&P/ASX 300 Accumulation Index posting a solid return of 2.5%.

The shift from the traditionally defensive yield based sectors to the Materials, Energy and Consumer Discretionary sectors continued in August.

The Energy and Consumer Discretionary sectors posted the highest gains for the month, returning 5.2% and 5.1% respectively.

The Property and Telecommunications sectors were the worst performing sectors in August, with -0.1% and 0.8% respectively.

The MSCI World (ex-Australia) Accumulation Index was down -2.4% in August, going against its positive run for the year.

The US Dow Jones fell from its all-time high and posted a -4.5% loss in August as ongoing economic uncertainty did little to provide the market with confidence regarding the pace of the recovery.

Despite the fall, most of the major equity markets have posted double digit returns over the past 12 months.

The Nikkei has been a standout performer over the past 12 months, returning 51.5% to 31 August, and was one of the few indexes to post a positive return in August, up 1.8%.

Over the long-term, global property has outperformed the Australian listed property sector.

Australian bonds were again subdued in August with the UBS Composite Bond All Maturities Index marginally lower posting a -0.3% loss.

Global bonds, as measured by the Barclays Global Aggregate Index, also saw little movement with the unhedged index posting a 0.2% gain, while the hedged equivalent experienced a 0.2% fall.

In August, the Australian Dollar (AUD) fell -0.9% against the USD to finish the month at USD 89cents. The recent interest rate cuts are anticipated to place further downward pressure on the AUD. Against the USD, the AUD is down -13.7% for the 12 months.

The information contained in this Market Update is current as at 11/09/2013 and is prepared by GWM Adviser Services Limited ABN 96 002 071749 trading as ThreeSixty, registered office 150-153 Miller Street North Sydney NSW 2060. This company is a member of the National group of companies.