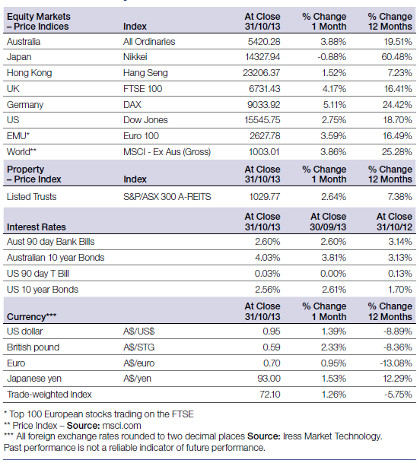 Following a period of accelerated growth in the advanced economies, global economic data returned mixed results last month. Although an upturn is still underway, the pace of industrial growth and business sentiment has slowed.

Trends in the emerging market economies have been mixed; with Chinese growth showing signs of stabilising, India remaining weak, and signs of a modest improvement across emerging Asia and Latin America.

During October, political game playing reached a new high in the US, which resulted in the partial ‘shutdown’ of the US Government. Given that the matter has been temporarily resolved, the shutdown isn’t expected to have a further damaging effect on the economy.

US data over the last quarter has been a little disappointing as the strengthening in consumption came in weaker than expected.

In positive news for the region, data has shown the Eurozone emerged from recession in the second quarter of this year, recording a growth of 0.3%. This growth follows a record 18 months of economic contraction. However, European Central Bank president Mario Draghi said the recovery in Europe remained “weak, fragile and uneven”.

Late last month Spain’s economy started showing signs of a slow recovery. Official figures show the country’s unemployment rate, which is one of the highest in Europe, fell slightly in the third quarter, from 26.3% to 26.0%. While this wasn’t a great result, it is starting to head in the right direction.

The Bank of Spain also confirmed that the country’s economy had emerged from recession after growing for the first time in more than two years. The bank estimated that Spain’s economy grew by 0.1% between July and September.

The Chinese economy grew 2.2% in the September quarter to be 7.8% larger than this time last year. The improvement in growth was slightly above NAB’s expectations, but is consistent with partial indicators during the quarter.

The Chinese economy has been gaining support from improvements in external demand – although export data for September softened significantly – as well as stimulus measures. Rapid credit growth earlier in the year may also be working to improve economic activity; however borrowing costs have now lifted noticeably.

Official Chinese data shows growth over the year (to the end of quarter three 2013) was driven by investment, followed by consumption. These results reflect the Government’s renewed emphasis on infrastructure spending to stimulate growth.

The recent pick-up in activity isn’t expected to continue beyond the end of this year, as efforts to rebalance and restructure the economy gain more traction. The NAB revised forecast for 2013 is slightly higher at 7.6% (from 7.5%), however NAB still expects growth to decelerate to 7.25% in 2014.

Over to the East and Japan’s improved growth has been the highlight of Asia, as Abenomics: economic policies advocated by Shinzo Abe, Prime Minister of Japan, have sparked the economy and are starting to lift the country out of deflation.

Financial conditions have improved markedly as a result of the exchange rate depreciation and the asset price rally triggered by quantitative easing. Inflation and expectations of inflation have increased, albeit remaining below the Bank of Japan’s target of 2% per annum.

Japan’s economic growth is forecast to reach 2.3% during 2014. This is expected to be driven by strong domestic demand, an improved export situation, and supported by a weaker Yen.

NAB’s survey also highlighted the decrease in capital expenditure plans from the June quarter to September – even though confidence jumped. However, the lift in confidence has not yet translated into better investment plans.

Short term employment expectations also remain soft and are consistent with NAB’s view for rising unemployment over the next year.

From a property outlook, housing and finance approvals in August declined for the first time since December 2012. This may be a result of the hype in some re-sale markets far from matching housing finance demand. Notwithstanding overblown recent weekend reports, at present there seems to be little sign of a bubble in the local housing market.

While the Reserve Bank of Australia (RBA) minutes again confirmed the RBA has a soft easing bias (they’re prepared to do more but signalling nothing more for now), it’s hard to see the RBA cutting rates given improving confidence and house price gains. Unless there is a big shift in data over the coming weeks, it’s unlikely there will be any interest rate changes for the remainder of this year.

The Australian market continued to trend higher in October, with the S&P/ASX 300 Accumulation Index posting a solid return of 3.93%.

The Financials and Health Care sectors posted the highest gains for the month, returning 5.9% and 4.5% respectively.

The Energy and Utilities sectors were the worst performing sectors in October, with 0.2% and 1.1% respectively.

The MSCI World (ex-Australia) Accumulation Index was up 3.86% in October, which was a very solid result.

Even with the US Government shutdown, the US Dow Jones still managed a gain of 2.75% in October. This highlights that the majority of investors didn’t expect any significant impacts from the shutdown.

All major equity markets, with the exception of Hong Kong, have posted returns of greater than 16% over the past 12 months, which is a fantastic result for equity investors.

The Nikkei has been a standout performer over the past 12 months, returning 60.48% to 31 October, but it was the only major market to produce a negative result in October, being down 0.88%.

On a 12 month rolling basis, property continues to underperform compared to the ASX 300 Accumulation Index, as investors continue to be attracted to more cyclical sectors.

Global bonds, as measured by the Barclays Global Aggregate Index, saw a small loss on an unhedged basis, posting -0.29% for October, while the hedged equivalent experienced a solid 1.11% gain.

On a 12 month basis, Australian bonds have returned a relatively poor 1.75%, which means they have underperformed relative to the unhedged global bonds that were up 7.82%. Hedged global bonds were also higher returning with 3.70%.

In October, the Australian Dollar (AUD) was up against all of the major currencies. It rose 1.39% against the US dollar to finish the month at USD 94.55 cents. However, against the USD, the AUD is down 8.89% for the 12 months to 31 October.

The only major currency that the AUD is up against over the last 12 months is the Japanese Yen. This is due to the relative high level of quantitative easing that the Japanese Government has been conducting and continues to pursue. As a result, the AUD has appreciated strongly over the 12 months to 31 October, up 12.29% to ¥93.

The information contained in this Market Update is current as at 8/11/2013 and is prepared by GWM Adviser Services Limited ABN 96 002 071749 trading as ThreeSixty, registered office 150-153 Miller Street North Sydney NSW 2060. This company is a member of the National group of companies.