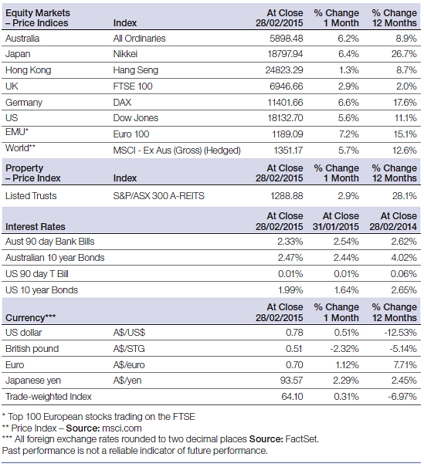 Global monetary policy remains extremely accommodative. Central Banks, although at various stages of the monetary easing cycle, will continue to maintain an easing bias for some considerable time.

Global manufacturing Purchasing Managers’ Index (PMI) data in February continues to suggest that global growth has improved. This is consistent with the International Monetary Fund’s (IMF) world GDP growth forecast of around 3½% in 2015.

China, Canada, and Australia are anticipated to continue to lower interest rates, while the European Central Bank (ECB) has only just commenced its €60b per month quantitative easing program.

Although the US is at the early stage of moving interest rates off historical low levels, the Federal Reserve Chairperson, Janet Yellen, states, ‘ it will be a gradual process, data dependent, towards normalisation of the interest rate curve’.

Global bond yields have increased following the improved US employment data, the continued improvement in the US economy and the commencement of quantitative easing (QE) by the ECB.

Oil prices, although volatile, have shown signs of stabilisation in February as the US has been rapidly reducing the number of oil rigs, particularly non-conventional drilling operations.

China’s PBoC provided further monetary stimulus with another 25bp interest rate cut to both the 1yr lending rate (to 5.35%) and the deposit rate (to 2.5%).

Global equity market valuations have continued to appreciate. The Earnings Yield / Bond Yield ratios remain extremely favourable for equities. Given the recent round of monetary easing it’s anticipated that global equity markets will continue to trend higher through 2015.

In the US, the February ISM Manufacturing report came in at 53.5 (down from 55.1). Despite the decline, this result continues to indicate reasonable growth in US manufacturing.

US consumer confidence pulled back in February from an 11 year high. The pull back was a reflection of recent gains in fuel prices and bad winter weather in parts of the US.

Although the CPI showed a negative headline for the yoy change in January, the encouraging sign was that core (ex food and energy) prices rose by 0.2%. In her testimony to Congress, Federal Reserve Chairperson Janet Yellen was positive about the ongoing strengthening in the labour market. She was also quite adamant that weakness in inflation was largely the result of transitory factors such as lower oil prices.

The S&P/Case Shiller composite price index of 20 metropolitan areas gained 4.5% in December yoy and above the 4.3% growth rate in November indicating that house prices in the US are still improving.

The earnings growth estimates in 2015 are now at 3% while revenue growth is flat. The 2016 estimated earnings growth is at 13%. The current 12-month forward P/E ratio is 17.2 based on a forward 12-month EPS estimate. This appears high relative to recent history. However, the earnings yield at 5.8% compares to the current 10 year risk free bond rate at 2% and a cash rate near zero. This gives strength to the argument that equities, although appearing expensive relative to history, remain attractive relative to bonds.

Eurozone manufacturing data remained steady in February, relative to January data. The impact of the weaker EUR and the lower oil prices have yet to flow through to the broader Eurozone economies. However, the Eurozone PMI services data improved.

The ECB’s €60b per month quantitative easing program kicks off in March and should be stimulatory for the region.

The various Eurozone business and economic sentiment readings for February were mixed. ECB President Draghi was upbeat on growth prospects in his address to the EU parliament.

Greece negotiated a four-month extension to its bailout in February after tense talks with creditors. Eurozone leaders want to extend help on Greece’s €240b bailout until the end of June, but the plans need to be ratified by Eurozone members.

The UK manufacturing PMI rose again in February, suggesting that the recovery has regained some pace following a mild slowdown in late 2014. The Q1, 2015 data is extending the strong 3% GDP growth experienced in 2014.

In February, China’s official PMI increased marginally from January. While the timing of Chinese New Year may have distorted the data, activity appears to be holding up well, suggesting that any slowdown this year is likely to be gradual rather than abrupt.

China’s policymakers appear to be increasingly comfortable with the idea that the economy is undergoing a structural transition to slower growth and are likely to announce a lower official growth target for 2015 of about 7.0%.

China’s PBoC provided further monetary stimulus with another 25bp interest rate cut to both the 1yr lending rate (to 5.35%) and the deposit rate (to 2.5%). This follows the cut to the Reserve Requirement Ratio (RRR) in early February. Expectations remain high that further PBoC monetary stimulus will continue over coming months.

China inflation rose 0.8% yoy in January, a five year a low. This will be reinforcing the weakness in the economy and keeping pressures on policymakers to inject more stimuli.

Although the Japan economy disappointed in 2014, down 6.8%, largely due to the consumption tax, Japan’s GDP increased by 2.2% in Q4, 2014, fuelled by exports. It does appear that the worst is over for the Japanese economy.

Over to India, the economy is shaping up for a stellar period. In its January report, the IMF anticipates India’s 2016 economic growth rate will be 6.5%, ahead of China’s projected 6.3%.

The Australian PMI fell 3.6 points to 45.4 in February, the third month of contraction; however, on a 3-month moving average basis the PMI has not been positive since mid-2013.

The RBA maintained the cash rate at 2.25% at its early March meeting. The wording has changed to ‘rates steady for the time being’ and ‘further easing of policy may be appropriate over the period ahead’.

Although Sydney house prices and auction clearance rates continue to be buoyant, other cities are more subdued. Given the continued weak labour market and low inflation, it is expected that the RBA will remain data dependent and any further move in interest rates will be sensitive to the weaker labour market.

With unemployment expected to rise further and the mining sector continuing to weaken, the RBA would prefer to see a lower AUD.

There are improving signs off a low base. Credit growth has continued to improve in January (+0.6% mom and + 6.2% yoy). The improvement has been driven by a slightly stronger business credit growth (+0.8% mom and now 5.5% yoy). Overall, housing credit increased 0.6% mom and by 7.1% yoy. The owner – occupied housing credit advanced 0.5% mom and 5.7% yoy. Investor lending grew 0.8% mom and 10% yoy, the mark that APRA has guided should not be exceeded.

The Westpac- Melbourne Institute Index of Consumer Sentiment improved by 8% in February, and reached its highest level in 12 months. The key factors were the RBA’s interest rate cut, the lower petrol prices and the continued strength in the equity market. In fact, the S&P/ASX 200 accumulation Index is up 10.39% in 2015.

CoreLogic RP Data House prices report for February shows a rise of 0.3% across the eight capital cities after the 1.3% January rise. Sydney remains the standout with prices up another 1.4% where for most of the other capitals it was a mixed month as far as prices were concerned. The February price increases in the CoreLogic RP Data showed Sydney’s auction clearance rate at 82.8% down from 87.8%. Melbourne was 76.5% from 74.9%, and nationally 77.7% vs. 77.1% previously.  Price wise, Sydney is now 2.9% YTD up from 2.5% and Melbourne 2.9% YTD from 2.6%. The housing price increases are confined to Sydney.

Following the RBA decision to cut the cash rate by 25bp to 2.25%, the S&P/ASX 300 Index had an extremely strong performance in February, up 6.1%. The strong performance was also aided by a better than expected H1FY 2015 reporting season the announced ECB QE program and the prospect of further interest rate cuts by the RBA should economic data warrant.

The large market caps represented by the S&P/ASX 50 Accumulation Index had a similar performance, returning 6.9% in February and on a 12 month basis the Index was up 14.69%.

All sectors were higher in February. The strong performances in February across the Materials, Energy, Consumer Discretionary and Utilities sectors were a highlight, up 11.8%, 9.2%, 7.9% and 7.9% respectively. The Financials and Information Technology sectors also performed well, up 7.6% and 7.3% respectively.

The Japanese Nikkei Index was also up 6.4%.

The UK FTSE was sharply higher in February, up 2.9%.

The Shanghai Composite Index was up 3.1%

Over 1 and 3 years, Australian REITs (A-REITs) outperformed global REITs while this was reversed over 5 and 7 years. Global property, as represented by the FTSE EPRA/NAREIT Index, was up 25.65% over the rolling 1 year period.

Global bonds (unhedged), as measured by the Barclays Capital Global Aggregate Index, posted positive returns for the one year period ended 28 February 2015, up 11.13%. The hedged index posted a strong one year gain of 9.73%.

In February, the Australian Dollar (AUD) was steady against most currencies but weaker relative to all the major international currencies. The trade weighted index (TWI) was marginally higher at 0.31% in February and -6.97% in the 12 month period to 28 February 2015.

The information contained in this Market Update is current as at 3/3/2015 and is prepared by GWM Adviser Services Limited ABN 96 002 071749 trading as ThreeSixty Research, registered office 105-153 Miller Street North Sydney NSW 2060. This company is a member of the National group of companies.

Past performance is not a reliable indicator of future performance. .Before acquiring a financial product, you should obtain a Product Disclosure Statement (PDS) relating to that product and consider the contents of the PDS before making a decision about whether to acquire the product.